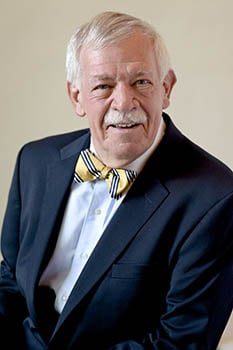 Shuff has counseled more than 175 clients across all sectors of the philanthropic community since joining the Alexander Haas in 1994 after serving 25 years in advancement leadership roles at Virginia Military Institute, Old Dominion University, and Valdosta State University. The largest part of his practice has been in higher education.

Talk with Shuff for a few minutes, and it is likely you will learn four things:

He has guided more than 25 successful campaigns with goals ranging from $3 million to $1 billion, is one of the authors of the award-winning book on university-related foundations published by the Association of Governing Boards of Universities and Colleges, and was one of 26 senior professionals nationally chosen by the Association for Fundraising Professionals for a Ford Foundation project to provide counsel to a select group of its grant recipients.

As a volunteer, Shuff has been Chairman of the Board of the YMCA of South Hampton Roads, President of the Tidewater Boy Scout Council, and a board member for more than 20 organizations including the Outer Banks Community Foundation, United Way of South Hampton Roads, Episcopal Charities Foundation of the Atlanta Diocese, and  Georgia Planned Giving Council. He has received the YMCA’s Red Triangle Award and the Scouts’ Silver Beaver and Virginia President of the Year awards.

“I love this job,” he says, “because I learn something new every day and I get to work with some really great people.” Because of his earlier career, a big part of his heart is in public universities and he is proud of his role counseling successful campaigns at the University of Tennessee, the University of Central Florida, and Middle Tennessee State University. “Frankly, however, I think I may have learned more from the campaigns we did with Wesleyan College, The University of Tampa, Florida Southern College, and Mary Baldwin College. They were easy to get your arms around and I came to understand the power of the devotion their alums have for them.”

“I was fortunate to start at Alexander Haas with three challenging campaigns that really taught me the basics – Sheltering Arms in Atlanta, Hubbard House in Jacksonville, and Birmingham’s Cahaba Girl Scout Council.”

He achieved CFRE status in 1987 and holds an undergraduate degree from Washington & Lee University and a master’s degree from the College of William & Mary.