The arrival of new data from Giving USA each year is an always an important moment for those of us who rely on philanthropic revenue to build and sustain our organizations. It’s a time when those who study charitable giving draw conclusions based on how much was given last year, from whom, and what cultural factors or trends should warrant consideration in planning for the future.

Giving to charity continued to grow in 2018, but not as robustly as in the past. Overall giving increased by less than 1%, but the growth between 2016 and 2018 was a meaningful 7.1%. As has always been the case,  individuals and families contributed the lion’s share of giving at 68%, but their total giving declined 1.1% from 2017. The most significant increase in the percent given came from foundations, including gifts from family foundations and distributions through donor advised funds. Foundation giving increased to 18% of overall giving, a 7.3% increase over the previous year. Giving to the arts essentially held steady from 2017 and continued to represent some 5% of total overall giving.

Giving USA 2019 offers several important insights into the trends uniquely affecting museums and performing arts organizations. Here are a few takeaways to consider in planning for the upcoming year:

Larger gifts from high net-worth individuals should continue to be a focus.

According to the 2018 U.S. Trust Study of High Net Worth Philanthropy, 90% of high-net worth households gave to charity, with a quarter of them giving to the arts. The Quarterly Report, also referenced in Giving USA, found that the overall increase in giving in 2018 was driven by a 2.6% increase in gifts of $1,000 or more; gifts under that size declined by around 4%. While maintaining efforts to increase gifts at all levels, arts organizations should prioritize their focus on larger gifts from individuals, through upper-level membership programs, project-related major gifts, and campaigns.

Campaigns are an important tool for attracting major gifts.

Cultural organizations continue to benefit from campaigns, which crystallize institutional priorities into fundable opportunities for donors and encourage larger gifts. Theatre Communications Group recently reported that 40% of theaters were currently in a capital campaign, and another 38% completed a campaign between 2012 and 2017, leading to a 23% increase in overall giving and a 55% increase in trustee giving during this period. This year’s Giving USA also reports that organizations in every region of the country received multi-million-dollar gifts in 2018, supporting capital, endowment, and programmatic initiatives, listing a sample of 18 representative gifts of $10,000,000 or more. As fewer individuals are giving and a greater percentage of philanthropic revenue is coming through larger gifts, now is the time institutions should consider organizing and launching a campaign.

Blackbaud Institute’s 2018 Charitable Giving Report showed that online gifts represented 9.5% of overall giving to arts organizations in 2018, and the 5.8% growth in online giving to the arts outpaced other non-profits by four times. While this noteworthy growth rate in overall online giving to the arts may be a function of the membership culture unique to museums, these trends illustrate the significance of making online giving a convenient option for donors and members, especially considering the decrease in smaller gifts.

Despite the complex issues that affect charitable giving in our country – from policy and tax law changes to social, economic and other factors – the voluntary, philanthropic support of arts and cultural organizations has never been stronger, with donors giving $19.5 billion to the arts in 2018. Reflecting on the numbers and trends outlined in this year’s Giving USA report, this is a time for optimism and opportunity, as we engage those donors whose generosity lights the fire of creativity, casts light on the human condition, and brings beauty and enjoyment through our nation’s arts and cultural organizations.

Highlights of the Giving USA data is below.

Giving to the Arts: The Numbers

Giving USA 2019: The Annual Report on Philanthropy for the Year 2018, was released in June, and amid a complex climate for charitable giving, individuals, bequests, foundations and corporations gave an estimated $427.71 billion to charities in 2018. 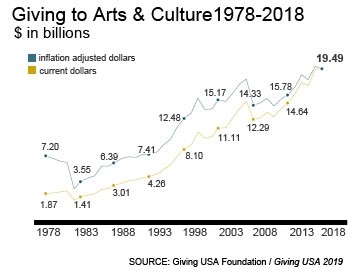 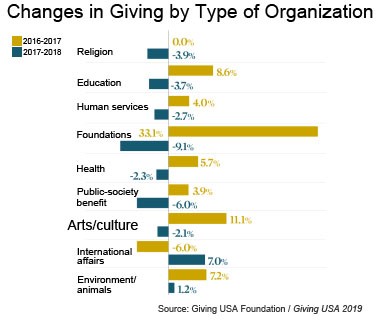 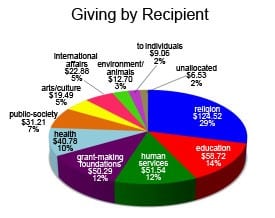 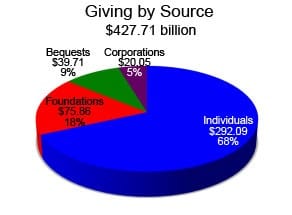 More information from the Giving USA 2019 report can be found here.